I'd already surmised the most probable way Creeley received this 8 1/2 x 11 staple bound chapbook.  I was surprised he saved it, don't believe the great poet actually read it.  I wanted to brag about it on Facebook.  I met Creeley  only once, a few years later, properly introduced by Joel Oppenheimer.  He didn't know me.

Bob Rixon shared a link. Saturday Good heavens, how did this land in the Robert Creeley papers collection at Stanford?
The strand : poems / by Bob Rixon. - SearchWorks (SULAIR)
Like · · Share Adele Kenny, Maggie McBride, Gail Thornton and 6 others like this.

Bob Rixon: Poet Joel Oppenheimer [my mentor] had a large cardboard box of poetry books he was sent & never intended to read. He probably put it in the trash when he moved to New Hampshire. Saturday at 12:53 ·

Jim Sharpe: He knew something special when he saw it. Saturday at 12:35 · 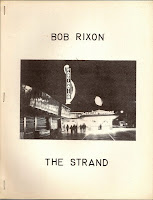 Bob Rixon: It did have a cool cover. The Strand: poetry chapbook published by Dave Cope, Grandville MI, 1983. Photo by Christine Dolinich. Seaside Heights NJ. by: Bob Rixon Saturday at 12:38 ·

Bob Rixon: I constructed the poem using John Cage chance methods. When I sent it to Dave Cope, I thought he would think me mad. He liked it. Later I renovated & retitled it "Boardwalk." Saturday at 12:46 ·

Jim Sharpe: I'm all for indeterminacy, chance and failure... as modes of operation... Saturday at 12:50 ·

David Cope: Bobby, I mailed it to him. He was on my mailing list and sometimes commented on the things I sent him. His sign-off was always "Onward!" I wouldn't be surprised if your book was among Allen's archive stuff at Stanford, too. Beyond that, you're noted as correspondent in my archive at Michigan. Gutt knows where else. Saturday at 13:31 ·

David Cope: I still think that group of poems is special. You oughta send the whole ms. to Jim Cohn for his postbeat longpoems project. DC Saturday at 13:32 ·

***
The poem, somewhat revised & retitled "Boardwalk" is linked in the blog sidebar.

I now have this at Stanford, plus correspondence in the Joel Oppenheimer Collection at the University of Connecticut & David Cope's papers at the University of Michigan. I have no idea what to with my stuff. Since the advent of e mail, I don't have archived letters anymore. I save a few to the old mail file.

Definitely cool. Creeley was a Top Dog to me. The beat poets were blah blah blah, I had to get over that. With Creeley, every syllable mattered, same as why I liked great song lyrics.