I "met" Jeff on, or shortly after, January 8,1993. I know this by looking up the release date for the Elvis Presley Commemorative stamp.

On my weekly WFMU radio show, I was chatting about an Elvis impersonator I'd seen performing in the lobby of the Rahway NJ Post Office. I was pleased with the act, & hoped the post office would feature live entertainment on a regular basis related to commemorative stamps, or just to amuse patrons. 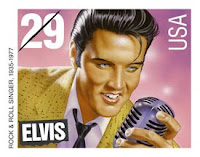 hen I went to music, the phone rang. Most of my callers either complained that I talked too much or requested I play music completely different than what they were hearing. But this caller wanted only to converse with the DJ. He resided in Rahway, & he also had seen & enjoyed the Elvis impersonator. His name was Jeff Jotz, & he was the editor of & did half the reporting for The Rahway Progress, a weekly. He did not identify himself as a liberal, a Democrat, a competitive swimmer, or a Notre Dame alum. I found these out later. I also found out later he had a great girlfriend who read poetry.

During our chat, which went on for awhile, I boldly asked if he could use any original writing for his paper, on topics like, say, Elvis impersonators at the post office. He almost jumped through the phone. Filling space in a newspaper for a town with some very slow news weeks was a constant challenge, & he suggested I write something, send it along, & if it had possibilities he'd let me know. I did, although it was several months before I got around to it, & he printed it. Jeff wisely left that underpaid job shortly thereafter. His girlfriend (now wife) also moved into my apt building. I loved Liz immediately.

Jeff is in a rarefied group of "coulda been WFMU DJs." There are probably a smaller number of these than of actual WFMU DJs. They're people who went through all or part of the audition process, even did some shows, but for various reasons couldn't stick around, most commonly due to the inflexible hours of day jobs that prevented them taking a regular entry level late night or morning show before WFMU had the options of pre-recorded Internet-only shows & podcasts. These people are always distinguished by the range & peculiarities of their musical tastes. But the shared characteristic of WFMU DJs isn't what we like, or that what we like may seem strange to some, but that we are confidently, completely unapologetic about it. It's a test one must, & unselfconsciously, pass to become a WFMU DJ. Jeff passed it. Notre Dame didn't prepare Jeff for it, but growing up in Jersey helped.

Share |
Comments:
I was only able to fill-in for overnight shifts (usually Joe Belock) at the razor wire-enclosed compound in East Orange. Plenty of strong coffee made the wee hours fly by. Generally, the callers described themselves on their way home from a wedding or the bars.
Oddly enough, after I helped WFMU find a new home just 2 blocks from my old J.C. apartment, I visited the studios less often.
For better or worse, I accomplished my goals I set as a high schooler - to be a WFMU DJ - by the time I was 24. Now I'm just filling time.

I didn't seriously entertain the idea of joining WFMU until I worked temp in the Upsala College Bookstore across the hall from the studio & concluded the station needed me. Something good was struggling to assert itself at WFMU, & doing a show began to seem cool