I just got home from getting my hair done. My local gas station, where I paid $30 to fill up a Corolla last night at $3.85/gallon, is today charging $3.99. It is 95 degrees out on June 7 in New Jersey. Southbound traffic on the Garden State Parkway is almost nonexistent, which means that most ancient of Jersey Rites, the day trip "down the shore" has gone the way of the Flagship, Denison Clothiers (where money talks and nobody walks), and Murray the K. No one is talking about vacations. No one is talking about anything but the price of gas. I spent $91 at the A&P on fruit, coffee, cheese, a package of pork chops, a package of Laura's Grass-Fed Lean Ground Beef, a box of panko bread crumbs, some low-fat ice cream bars, and a cheesecake for Mr. Brilliant's birthday. And Sean Hannity is talking about how Barack Obama "will move this country in a direction that is so radical that it will shock your senses."

C'mon let's talk about Spam (always on sale now, they love it in Hawaii), 80% ground beef (the kind that shrivels into nothing as it gives up the grease & water), imitation sandwich slices (the not-cheese cheese), a shrink-wrapped angel food cake from the day old bin for Mr. B. What's wrong with Jello? Let's talk about sacrifice. Let's do it to Support the Troops. 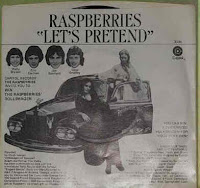 Share |
Comments:
That's funny - I was on the Parkway at 10am today - Northbound, thank heaven - and southbound was jammed.
Suzette

& thank heavens, none of them woke up in Iraq.

Update: the 120 mile drive home today showed no reduction in traffic. You'll be happy to know that the dire and dour news reports about the decline in American quality of life have been misreported or possibly misrepresented. What possible reason would anyone have to do that?

No gas stations we passed were not busy, we saw all manner of RVs on the road from vans to "rock group tour bus"-sized vehicles. Americans do not seem to be doing their part to fulfill the misery index mandated for them by the intellectual left.

You get what you settle for.