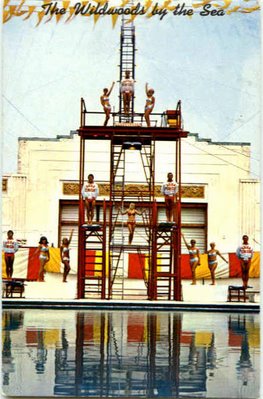 Share |
Comments:
I think possibly you and I are the only 2 ppl who remember the Aqua Circus in Wildwood, NJ.

Oh, you are not the only two! My father Ray Martin was the MC for the Aqua Circus in the sixties. We used to be able to hear his voice from our house. The High Dive, the Sponge Dive, the Fire Dive, the AquaMaids, the AquaManiacs...! I've been searching for photos of this. I'm glad someone else remembers!

I remember! I am the top right Aquamaid of that picture. I was scared to death of being up that high.

Hi you now have 4 people that remember i use to work there in the 70s it was the best time of my life.the divers were great to me they tought me a lot i even did one of the dives in the show at the end of the season i went up to take the lights down and they would not let me down i had to jump it was scary but i did it but will never jump that high again.

i dove in aquacircus the summer of '69. wiseman

I remember my grandmother taking me to see the Aqua Circus. I even have a pennant. I was very young but I remember a clown or somebody working the crowd and selecting me to come up to the water. I remember being scared to death being next to that water. I could just imagine what it must be like to be up on one of those diving boards.

I was the front man/Bally stand emcee in the late 70's. Followed Lenny D. in this roll. Worked with many interesting people like Mr. Fire Diver, Lucky West as well as world high dive champ, Pat Suker. Also, Victor the Bear and the Balancing Kaneck's

I, Pat Sucher, was a performer / Aquamaniac / Carpenter / high diver in this show in 1974 to 1978. That pool was shallow probably the most dangerous high dive the Maxwells had at the time. Rick White and I were working back and forth between wilewood and Great Adventure at the time, Anyone remember the names of any more of the performers?

I remember going once in the 1960s. I seem to recall it being on The Sportland Pier. I also remember one of the divers, Mickey Barnett.

My Dad, Billy Hoctor lied about his name & age, (he was 14 yrs. old and told Aqua Circus his name was Billy Donovan, his stepfather's name), to become one of the high divers - 80 ft. up, he said, (1940s). I couldn't believe how high and he said there were 2 brothers, the Otto brothers (I think), that dove from an even higher platform! Talk about daring! My Grandmother sitting in her Wildwood home heard the MC announce "Billy Donovan", (there was no air conditioning, all windows open), and she said "Billy Donovan?", her 1st husband's name, put her hat on and went to see who this Billy Donovan was...found out it was her youngest of 10 children, my Dad, grabbed him by the ear & pulled him home!

wow! It's great to hear ppl talking about the aqua citcus!! U say it to someone today and they look at u like u have two heads...wats the aqua circus?! After it closed they would let u use the pool for a fee and I think they had an arcade inside..then got rid of the pool and built a skateboard park. Ok here's wat I need to kno..it wasnt on sportland pier..it was right across from Sportland pier..on the boardwalk..they would have a trampoline out front and pick someone from the crowd to come up and do a trick. it wasn't on the corner it was one or two spots in. so was that like wat...23rd st? and wat is there now?? I need an old time wildwooder to answer and confirm... Thank u all!!

When I was there the Trampolines were behind the Bleachers down on the street. A handsome guy named Gene with a beauty mark on his cheek worked there. My first crush

Trampolines were on 23 or 24th Do you remember Gene who worked there ? How about the Clevecci Twins and a guy named Joe with Blue eyes that hung out at the Arcade/ Pool. They were the Cool Crowd. Wonder what they did with their lives.

I remember "The Aqua Circus" on the Boardwalk back in the '70s. In fact, I & my family would go every year we went on vacation. I loved the antics of the Aquamaniacs!!
Very happy memories were spent on The Boardwalk in Wildwood!!
Patricia Mastromonico-nee-Labazzetta

Don't forget that Victor the wrestling Bear used to work there too Wrestle him and you stink for a week! Yeah,the Aqua circus,that was when it was wildwood,now it looks like every other shore town with tan and grey or light blue condos everywhere,Gone are most of the motels with the cheesy neon signs that made wildwood unique,and the typical wildwood house. They ruined my beloved Wildwood,but still I come,every year. The boardwalk is still there of course but also changed but that happens,I just wish the historical preservation society of wildwood had sprung into action way way sooner! Then we might still have the thunderbird motel and the Hawaiian Rumble on 25th St.. That had an ice cream shop an arcade for on the walk home from boardwalk you could stop and play some Ski-Ball or Pool or? And at the end of block at 25th and surf or ocean ? One of them?There was the Hawaiian Rumble miniature golf course,famous for its giant Volcano...also Moore's Inlet,(Kensington south) Cozy Morley show,Harry the Hats. And the already demolishe 125 plus motels,hotels in Wildwood/North Wildwood/Wildwood Crest and not so much in West Wildwood tho,
To build this boring Pre-fab replica of every Shore town u.s.a.. I say Bravo to the motel and homeowners who told the realtors and builders,to kiss your ass and keep your little part of wildwood genuine!!We owe it to future generations to keep the feel of wildwood as original as possible,just as my Father took me and my bros and sister,then I took my son,and so on ,as it should go!All the True "WildWood" At Heart people know exactly what i'm talking about!! Watch the tram car please! And the vendors walking the beach...Fudgie Wudgies here!!! Daily news here!!

Not talking about where the trampolines always were,I meant the one the would put in front of the Aqua circus right on the Boardwalk and there would be an M.C. and a pretty girl in like her trampoline costume,and they would pick a volunteer from the crowd and show them a trick bounce or?. And you would get in free or?or ask you if you wanted to Wrestle Victor the Bear. Stuff like that.

Yes, John P. gone are the good old days of real fun & enjoyment in Wildwood!! Sad but true!! Of course, if you didn't hear "Get your Philidelphia Daily News Here" & the ice cream guy saying, "Fudgie Wuggies here"!! The music & the atmosphere of enjoying the events on the boardwalk are gone!! :( The Aqua Circus was the best & funniest place to enjoy lots of laughing & joy!! I haven't been to Wildwood since 1983, I went w/My Mom & Sister & stayed in a motel that had a volcano fountain in front. I don't remember the name of the motel but it was a popular hotel for families. It was two blocks from the boardwalk. I'm sure it must be gone. Most likely.
When we stopped camping @ Ocean View Campground in Ocean View, My Family completely stopped going down to Wildwood. My Dad being the Italian man he was loved Sea Isle City & Avalon. Avalon Pizza was the best pizza of course!!