2005 was a terrible year for the world & for the United States.

The Earth shook, stormed, & flooded. There'a nothing we can do to prevent it, but there's much, much more we can do to make ourselves safer.

Our national government is in terrible condition, & we know why. I'm coming around to the view that George W. Bush is the worst president we've ever had. I don't want to believe it; Let that one go to Buchanan, giving up Federal armories to treasonous slavers. A few presidents have been dangerous because they were incompetent, & a few because of what they believed. George W. Bush is dangerous for both reasons. & he ran for election twice, lost twice, & is still president. But no matter what, a minimum of 30% of Americans are idiots, always were idiots, & always will be idiots. No matter what questions the pollsters ask, that 30% is there. This probably applies to the entire human race. 2005 comes to a gloomy end.

My girlfriend left me early in 1996. She was an artist; she got married about a year later, but I haven't seen or heard anything since then about her or her art. The civil service job I started late in '95 turned out awful, then I was laid off in the Clinton welfare reforms. Neither was acceptable. My mother died that year, a miserable end to her decades of alcoholism. I started therapy in '96, it seemed to be helping, then my therapist announced he was emigrating to Israel. There were some good times over the next decade, a few hopes. There were no new "relationships" of consequence. Until 1996, I'd rarely been alone for 30 years. 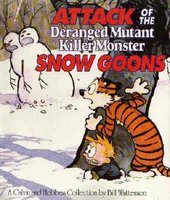 It's Bill Watterson's fault. We mark a sad anniversary today. At the end of 1995 Watterson gave up Calvin & Hobbes, one of the most intelligent, funniest, lovable, & best drawn comic strips of all time, & by far the best daily strip of its time. Calvin & Hobbes sold a copy of the Star-Ledger to me 7 days a week. Sunday's color C&H was often a frame busting work of art, & Watterson had waged a hard, bitter fight to win an open field for his beautiful creations. He was a giant among mainstream comic artists. There were a few other strips with integrity, but none with the genius. The single panel The Far Side had ended a year earlier. After C&H passed into history, none of the other strips I read while the comics pages were open held my loyalty. No doubt about it, my life went into decline when Calvin & Hobbes ceased publication.

Share |
Comments:
You are such a good and inventive writer--How about some positive writing from you? Much of your writing is enough to make anyone slit their wrists.

A wish for a good New Year for you. Tommorow is a new day, a new week, and a new year; who knows what will happen, and it sounds like you're ready for a good one.

BTW, although I agree no one quite compares to Calvin, Get Fuzzy is often brilliant.

obviously you are right. Spending time on the comics page and not on the news and politics stuff helped you be happy.

its the news and politics that are killing us all. slowly.

You're that Rix! I am a long time listener.
Hate, as I do, to blog-whore, here I go--some tips from the world of statistical engineering (which I know nothing about)for forcing improvements in 2006.
http://verb-ops.blogspot.com/2006/01/bons-mots-2005-was-one-of-those-years.html