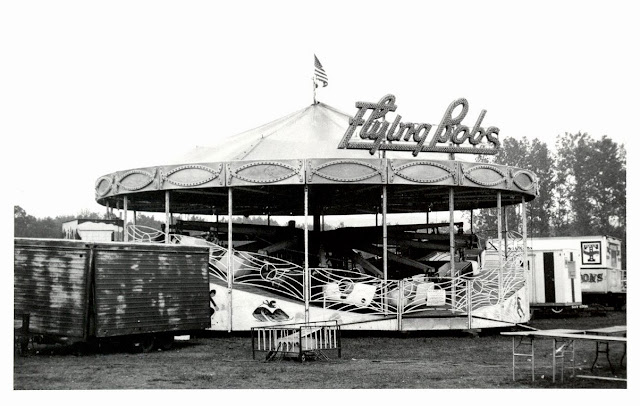 Funny about Christmas in the middle of week. Wake up & know it's the day after Christmas, but takes a few seconds to remember what day of the week.

The day after Christmas in Bethlehem, Mary & Joseph were asking, "Well, that was really something; what do we do now?"

Over at Kos, some diary complaining about what some right wing pastor said, I comment: "One of my Christmas traditions is not to let this kind of crap bother me until after Three Kings Day. It'll still be there."

For me, the Christmas story is the back story of Mary & to a lesser extent Joseph.  The various authors of this fabulous, elaborate. touching, oriental tale were somehow pulled together into a unique narrative that transcended the traditional tales comprising much of it.

We view the Christmas story & the Nativity from a perspective long after the crucifixion & Resurrection events. We know what happens to Jesus,  what he does, & the growing movement established in his name.  Who is telling this story?  Jesus never told it.  Paul, through whom we learn the earliest beliefs & practices of the movement,  apparently was unaware of it.  Perhaps someone who heard Mary herself tell it?

It begins with Mary witnessing the worst possible thing that could happen to any mother: The public, painful, gruesome, unjust execution of her son. Roman law prohibits open displays of grief at executions; if you weep & wail, you yourself could end up on a cross. We ask, How is she able to endure the unendurable? & that is the question the authors of the Christmas narrative answer for us with wonderful insight into the characters of Mary & Joseph, the faith & courage of this extraordinarily ordinary couple. We especially learn Mary's heart.

When Jesus is born in the stable, only Mary & Joseph, Elizabeth & Zacharias, nearby  shepherds who saw angels singing,  plus some presumably Zoroastrian astrologers still enroute have any inkling of what is transpiring. Franciscan types are permitted to believe the local animals were also informed in their own fashion. 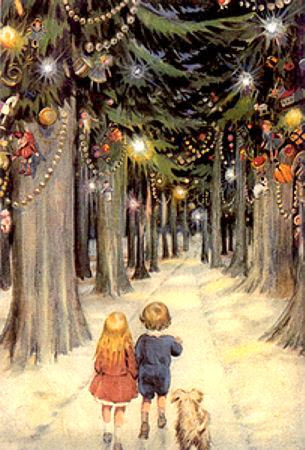 Christmas Eve: A Recollection is probably the best piece of writing I've done on the occasion.

"The Tropicana will take the slot machines and table games, while Caesars will get the 800-plus-room hotel. Neither has any interest in operating the business in Atlantic City's now diminished market."

From the start I thought there was something deeply flawed in how gambling was brought to AC. Over time, I wondered why Vegas increasingly reminded me of Atlantic City more than Atlantic City did. Ah, that was the flaw.

Nobody had a vision of how to combine the successful self-contained casino resort concept with the open front gambling hall arcades of downtown Vegas (which were failing) & the entertainment value of the Diving Horse, & crazy sights like Freddie "Boom Boom" Cannon shouting "Woo Woo" from the roof of a restaurant, & of course what people love about Jersey from shows like the Sopranos & Boardwalk Empire. To this day people in the Peterstown section of Elizabeth pretend there's no Mafia. It's now part of their tradition. They're expected to act like that. But AC was never that way. AC lost its backdrop of sin & cheap thrills. You went to an island. What you did there really could stay there.

It did work like the Monopoly game for a long time.  Whenever a failing casino went up for sale,  another corporation or billionaire mogul  bought it.  Mohican Sun now operates Resorts.  A brand new casino was opened a few years ago & was failing from the start, as just about everyone expected.  This sale is truly ominous. What can you do with an 800 room hotel & no casino? Warehouse it. For what & for when? 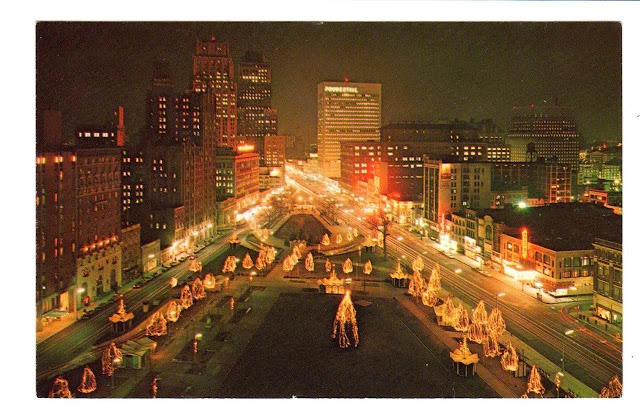 You're the President of the United States & you're on "vacation." You're sitting at a kitchen table in Hawaii sipping freshly squeezed orange juice, checking out last night's NBA highlights on your tablet, & thinking that the only ciggie you really miss is the first one in the morning. An aide comes in & informs you the national security briefing is in ten minutes, unfortunately it's going to run a bit long, so you'll receive a revised daily schedule afterward. You go back to your orange juice & sports. Your daughters come in to give you a good morning hug. Before the door swings shut you catch a glimpse in the next room of a military attache in a spiffy uniform handcuffed to a briefcase.

I find it odd that conservative Christians are so insistent about calling whatever it is we are doing between Thanksgiving & New Year "Christmas." The solution is to stop participating in it & celebrate Christmas, & let everyone else do whatever they want.

The astonishing double negative of "God Don't Never Change," with its existential contradiction, sums up why this collection should be in the home of every gospel music lover in the world. Johnson's songs encompass the entire spectrum of spiritual experience from despair to hope to acceptance to mystical transcendence. & he leaves no doubt that he's been through all of it. Inspired by God's love, these songs, the singing, the guitar playing, are absolutely revelatory. Of course, Blind Willie Johnson is listened to mostly in the spirit of dispassionate appreciation by blues afficionados. Believers will have that plus the added pleasure of knowing what's really going on here. "Everybody Ought To Treat a Stranger Right" takes sound Gospel advice & makes it a request for spare change. "John the Revelator" kicks like rock & roll. "God moves on the water," indeed!

Song of the Metropolitan Man

Nobody Told Me the Air Was Bad 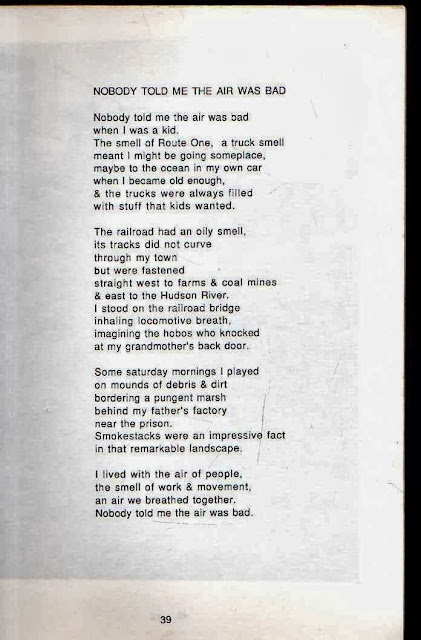 The kind of gritty poem with a point Dave likes. But I see sketches for three poems or stories; about highways, growing up near two railroads, & going to work with my Dad on Saturdays at a company near  a landmark prison. I probably read this as a short monologue on my radio show. I never announced I was reading a poem.

Thinking of my late cousin, Buddy Dorney, this morning, who died in strange circumstances in early December 1962, apparently swept off rocks while fishing with his son in Tierra del Fuego. Only Buddy's body washed ashore. He was down there working for an oil company. Buddy was my Catholic godfather (I think for my sister also), a job he knew had no responsibilities, fine with him, as we were not being raised Catholic & he was minimally observant.

He loved beautiful women & flashy cars, married a former & drove a latter. We rarely saw him. When he visited, usually unannounced, he draped himself in tire snow chains from the garage & banged on the windows as "Mr. Clanky Chains," which threw us four siblings into hysteria although we knew it was him. He knew parlor tricks. Nana, my dad & mom adored him. Nana had raised Buddy & his older brother Jim, her late sister's kids. So they were more like young uncles to us.

Buddy was the one fellow in my family who looked totally Irish, with dark hair, bushy eyebrows  & piercing eyes. He was the only one in the family considered to have the gift of blarney. Most Irish love blarney, knowing it's mainly bullcrap wrapped in flattery & persuasiveness. You enjoy blarney by surrendering to it.

When Buddy died, I noticed my parents were unable to grieve together. Their marriage was over. I walked around the corner & sat on the steps of the Methodist Church, looking up at the winter stars, wishing I was in Atlantic City with my grandmother, I believed I could be a comfort to her.
***
Next day, in boys health class, when the story had appeared on the front page of the Elizabeth Daily Journal, old Coach Herm Shaw devoted the entire class to his memories of the Dorney Brothers. Coach Shaw, a kind man, did that for me. I never forgot it. When Coach died many years later, I sent a note to his wife, Dorothy, also a teacher, remembering the day. She was pleased to receive the note. 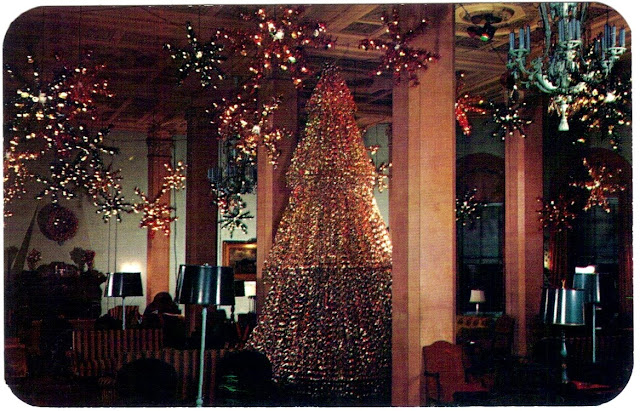 My brother Joe is having a very slow recovery from complex heart surgery.  Still has a tracheotomy.    My friend Carrie is home from her breast cancer surgery.  I'll talk to her later on the phone. 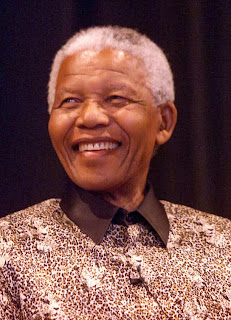 When we think of Nelson Mandela, he is usually smiling (a trait he shares with Bishop Tutu & Mahatma Gandhi). It isn't the pasted smile of a celebrity or the smile of someone intending to deceive you. It is the smile of a man  more accustomed to smiling than frowning. Despite the great trials he had endured.  His smile reached people before his words did. It communicated his irrepressible hope. 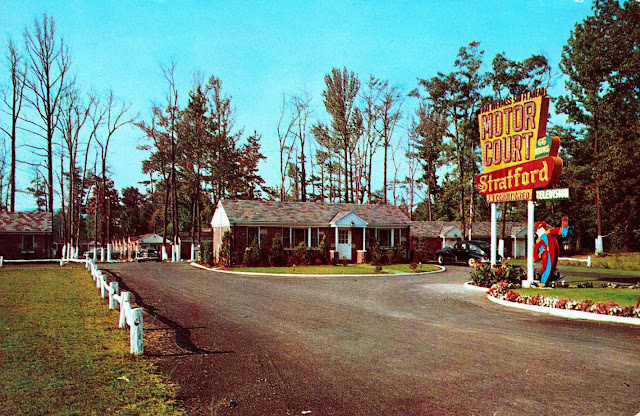