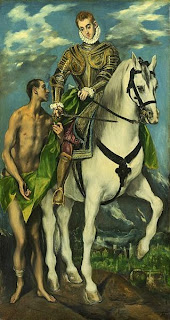 Martin of Tours and the Beggar by El Greco. The story is that Martin, a low-ranking officer in the Roman cavalry, gave half his ample cloak to a beggar. The beggar is, of course, Jesus. They all are. The lesson is that there's enough to share, & no one need freeze or go hungry. Today is his day, the day the first Armistice was signed in 1918, stopping World War I. I knew that growing up, but not the connection to Martin of Tours, Martinmas.

Although having a day to honor veterans is right, I wish we had established a separate day for them & kept Armistice Day, which was about the end of a war & the establishment of peace. A day devoted to peace. Rarely see the word "peace" in print anymore, why is that? I was born on Armistice Day. It was changed a few years later. "Ami" in my mother's maiden name Amidon has meant peace or a quality of peace all the way back into proto-Indo-European language. God's joke on a hot-tempered child whose growth spurt screeched to a halt at 5'6", but endowed with a scorpio's penchant for creative, patient revenge. Oh yeah, in case I inherited the gift of blarney from the Irish side, I was given a stutter that didn't subside to a controllable level until I was in my Twenties. You have to learn to write poems, kid.

Signing a truce is not the same as making peace. It's better than fighting, but it does not reconcile. Nations make & observe truces, as do families  & individuals, but use them to avoid getting to the heart of the matter.

Prevent a free press from learning the truth & it won't need to be censored for trying to report the truth.

Never reveal who is getting rich from a war.

The true costs of a war are so mind-boggling high that hardly anyone finds them believable. Don't worry about it.

When stirring up the populace for a war, in no case predict & include the costs of the aftermath of a war, which are paid for by citizens for 100 years after the war in the form of medical care & survivor's benefits. As of March 2013, two children of Civil War veterans were still receiving very modest annual payments.

Ship bodies of fallen soldiers home quietly & quickly disperse them across the country. Hide the most grievously injured.

Call veterans "heroes" but keep them so patriotically stirred up by slights both real & imagined that they'll cheer cuts to social service programs without noticing  vets & the V.A. are getting screwed too. The vets of WWI & WWII didn't fall for this scam. Know your history.

Share |
Comments:
Sorry I didn't post a happy birthday on my blog. I'm still not ready to get back into the dynamics of the blog because it is somewhat in conflict with my desires to remain optomistic about all things given my current physical condition. Happy Belated Birthday.

Thanks. Greetings accepted any time. Say hello on Facebook once in awhile.