My parents' marriage began visibly collapsing after Nana, my paternal grandmother, retired, sold the house to my parents & moved to Atlantic City. I have never given much thought as to why Nana apparently served as a "glue" in the marriage. The arrangement was economically advantageous to Nana & my parents. Dad had done a lot to make the house more family-oriented. Made many renovations. But his interests were becoming more personal. He had put in his years with the Boy Scouts, Little League & Married Couples Club at the Methodist church. He was more into military history & local politics.

One night mom & dad were having an increasingly alcohol-fed argument downstairs as I was trying to fall asleep. I rarely fell asleep easily. I went downstairs & told them to stop, that I had school the next day. There was nothing I could have done to more righteously embarrass them.  They looked humiliated. To dad's credit, he eventually quit the heavy drinking.   But it got worse, Another night mom actually so lit into dad he wept. I heard this from my bed. I felt humiliated.

There was one person who saw, & heard & knew the history of this marriage. & was witness to traumatizing events happening to my siblings before I was born, when my one of my brothers was horribly burned on a hot radiator. My parents were not directly involved in this.

My week long visits to Nana in Atlantic City were sanctuaries. I subjected myself to her rules - few but firm, three good meals, regular bedtime hours. The only "favor" Nana asked of me was to learn chess from a lonely, elderly man in her building. I was a lousy student,  would've preferred checkers. But Nana supplied some ice cream for the occasions. He also had some interesting stories.

When I returned from a week in Atlantic City in the summer or over Easter vacation, I probably looked healthier, slept better, behaved less neurotically for a brief period. Being nurtured isn't the same as being spoiled.  Nana provided me with a emotional   "vacation". She knew what I was trying to escape. She gave me an amazing "playground," a fairly long leash within certain limits, & did not fill up my pockets with money. She was on  a fixed income. 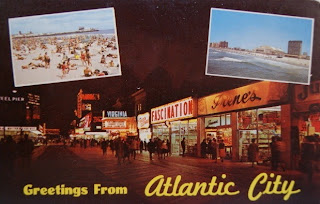