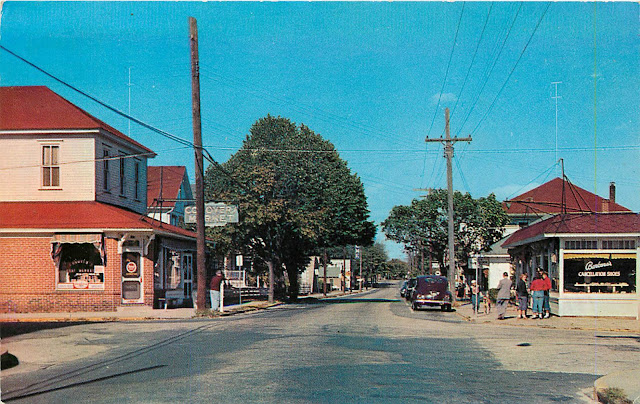 "Downtown" on Shore Road looking north.
1950 population: 2,480
1960 population: 4,504
On the mainland, across the bay from Ocean City, Somers Point is a peninsula surrounded on three sides by bay & marsh. This postcard is pretty much how I recall the town as a child in the Fifties. Outside of some motels & a honky tonk waterfront, it remained a sleepy, small town in the summer. I think my family began barging on Aunt Bella & cousin Cath in the Forties, for a week in early August. Cath, my godmother, has lived there on the same street her entire life; first in a bungalow, then moving across the street to a larger house after she got married & began having babies. In the Fifties there were cornfields on the edge of the town. & pine woods, & ferocious mosquitoes. Note the teenage girls in the lower right (click on postcard to enlarge).