[uncompleted free association appreciation of the guayabera. If I post it I'll finish it]

I've always worn tropical shirts of the tie dye rather than the loudly  colorful print type. I've had several for twenty years; they're well-made  & I started hang drying them when I saw what dryers were doing to some of my other favorite shirts. Think about what happens  in the 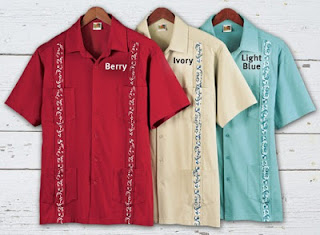 dryer.  I suppose I've always seen guayabera shirts, probably associated them with old guys & Haband - a lot of truth to that. When I taight piano in the 80's, the music studio had a lot of Filipino kids for students. In warm weather some of the Filipino dads wore light-colored guayaberas with emroidery.  I liked these middle-class  Filipino families, very comfortable with them. They were a bit on the conservative side circa America 1950's, mostly Catholics, good sense of humor. Many of the women, to be honest were very attractive. The men were generally short, my height, but stockier. They looked good in guayaberas. Some of Filipinos were fluent in Tagalog. When the women in the waiting room chatted they switched to Tagalog for the good parts.  So I associated guayaberas with Filipinos & decided someday I'd try wearing them.

Share |
Comments:
The Cubans have these shrits too? I found these a a bit different but are also called guayaberas.