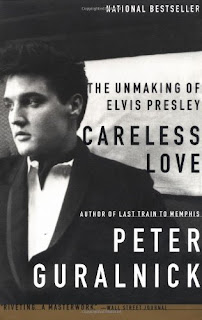 By Peter Guralnick. Second book in  massive two volume biography of Elvis. The first, Last Train to Memphis: The Rise of Elvis Presley, took the story up to Elvis' induction into the Army. This one goes the rest of the way.

But for a few well-made movies & the '68/'69 comeback, this book is so bummer I read it as fast as I could. For all the careful research, the message is  pretty much "what you saw is what you got." From the time El came home from the Army (where he became permanently hooked on pills) there wasn't a prayer of getting through to him, not a chance he would become the kind of "serious" actor he fantasized. Everyone in his insular life was an enabler, including Colonel Parker, banished if they weren't.

He was incapable of sustained intimacy - not just sexual intimacy. Most of the Memphis Mafia were thugs. When the one thing that could keep him focused & creative became unimportant, his music, he was doomed.

I used to blame the Colonel for driving Elvis through those mid-Seventies tours & Vegas engagements when he was a bloated, sick addict & his fans - until the very last year - were such indiscriminate consumers of his increasingly ugly performances that Elvis felt as much contempt for them as he did for himself. But without the income both he & Parker really would have gone broke, realizing his father, Vernon's, worst fears. Elvis went, quite literally, insane. He was incapable of making sound, rational decisions. By 1975 a  judge may well have concurred & allowed his family to force him into rehab. Which of course they wouldn't do because Elvis was supporting hundreds of people & handing out cars, houses, jewelry & bags of money on any whim. The relatives & hangers-on lined up with their hands out. RCA had numerous opportunities to sue Elvis for delivering bad product or no product at all, Nowhere in the book does Guralnick say RCA was losing money on him. The profits kept on coming.  Elvis earned $60 million in 2011.

Perhaps the only thing that could have changed the outcome would have been a bust of him & his entourage for the massive amounts of drugs (including cocaine) & firearms they carried around on tour, across state borders. But he was Elvis Presley, not The Rolling Stones. Every cop at every stop was hoping for a new Cadillac. It is pointless to be discriminating about Elvis now. Love him or leave him be.

Guralnick is the kind of writer who doesn't analyze his subject, ot tell us  what Elvis is thinking, or imagine conversations, all part of Nick Tosches' style.