It's an uncomplicated story. Takes bit of telling. In fall of 1966 I bought a cheap portable organ & got myself into a garage rock band. Garage rock bands needed organs. I hardly knew what I was doing, but I didn't need to know much. The band had two guitars, bass, drums, organ, & a jerk lead singer. "96 Tears" was my featured spot. We were really awful.

The Doors released their first LP in January 1967. I probably had heard of the band- they had made some noise in L.A. that got their name into magazines,   but I can't recall hearing anything from them until "Light My Fire" was released as a single. It was an extraordinarily distinctive record in its full version. They sounded like a garage band, but not my band or any other local band I had  heard. & what was with that long organ solo? The organist clearly was not a virtuoso, but it was an interesting long solo. I bought the  LP & loved it, except for the silly, long  song conveniently  placed last on side 2.

I still don't think we learned "Light My Fire."  We changed jerk  lead singers.   The rhythm guitarist left - band was interfering with his night job pumping gas, & his car was expensively high maintenance.   We were still really awful. 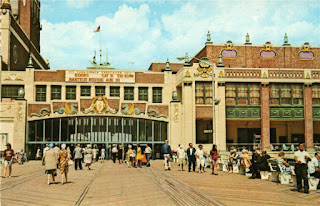 That summer, The Doors were hastily booked into Convention Hall in Asbury Park, one show, not widely promoted, supplanting one of two Lou Rawls shows there. My girlfriend & I went to see them.  We were impressed. She, of course, loved Jim Morrison in his leather suit. He was one sexy guy.  What I noticed was the leanness of the band, that although Jimbo was the  "star" of the show,  the four band members  were working as   equals. There was no bass player - the organist played simple figures on a keyboard bass (something is lost without a bassist, as both they & The Rascals knew), The Doors were a true collective creative enterprise, & they sounded it. Jim Morrison was not the "leader" of the band.  As each member had  their musical moment in the spotlight, Jim got out of the way (usually. He rubbed up against Ray Manzarek during the "LMF" solo).

Below me (I was in the front row of the balcony, the venue about 1/3rd empty seats), were members of Lou Rawls' ace touring band looking on uncomprehendingly;   "We were  bumped for this?"

Asbury Park Convention Hall was probably the largest type of venue in which The Doors could be really effective as the kind of band they were,. a "chamber rock band" (a rock critic term) designed for the rock clubs that nurtured them. There had always been rock bands like this, back to rockabilly trios, or The Velvet Underground in NYC, of which I had only a passing awareness because I knew they  were "hip" in the city.

Ray Manzarek was inviting garage band organists like me to step up & play with intelligence even if we were largely self-taught, on the instruments we had. I felt liberated from the examples of Booker T & The Young Rascals' Felix Cavaliere (an almost god-like presence in Jersey rock), with their Hammond B3s, & from Matthew Fisher of Procol Harum, who would become a favorite as "A Whiter Shade of Pale" climbed up the charts that summer.

I determined at the Doors concert that my band had to change to better accommodate me. I must have done a pretty good selling job, as no one in the band was particularly creative or ambitious (the remaining guitarist began showing a good musical intelligence). We learned "Light My Fire." "Soul Kitchen" (the essence of their sound),  Twentieth Century Fox." "I Looked At You," "Take It as It Comes."  I upgraded to a Vox Continental (later added a Leslie speaker, I never did abandon a love of thick, Hammond textures).  The bass player was pushed out. He was my best friend, but he was worse than really awful. My weak left hand was better than him. I bought a Rheem key bass. We picked up four songs from the second LP, including the complete "When the Music's Over." We struggled on into 1968, a very bad year in America & in my own life.  The drummer eventually moved on.  He had graduated high school & his real love was accounting.  We somehow found a replacement,. & a new lead singer  was right in front of us, a guy we hung  out with, rather bookish-looking but who sang well & was completely transformed at the front of a band. Girls loved him.

We milked one good year out of this band, which didn't sound like The Doors or The Rascals; we didn't try. We raised our level from really awful to just awful (Joe Walsh considers this the natural transition, that the important part was getting out of the garage & before an audience).  Some of our music & arrangements were relatively adventurous.  We jammed too much & too tediously, but that was characteristic  of  most garage bands.

Ray, by some accounts, was not always a nice guy (a friend has direct experience of it).  In '67 he was somewhat older than the average rock musician with a first hit. This was to his advantage. He had a college degree (economics), was in film school.  He hadn't scuffled up through bar bands. Either consciously or intuitively (I haven't read his autobiography)  he had a vision of a band as a complete conceptual package, like the art school-influenced  bands of New York, London, & later New Wave. They covered a Kurt Weill / Bertolt Brecht song on their first LP (it wasn't "Mack the Knife").  This was very attractive to an 18 year-old garage band organist who read poetry. Jimbo wasn't a great poet but he certainly understood it as a concept.

One night in 1968 several of us from the band went to midtown New York just to hang out, a common pastime for bored Jersey kids.  We were walking on a side street by the Americana Hotel when a couple came around the corner ahead of us & walked toward us, an attractive woman & a familiar man. As they came closer, the man looked more & more like Ray Manzarek. "Are The Doors in town?" I asked my friends. One said he thought so. It was Ray Manzarek. As they passed (she was a very attractive woman) I said, "How yah doin', Ray"  He said, "Good" & they walked on.

Share |
Comments:
Thanks Bob, that was great. I loved the Doors practically to the end (they only had 90% of my attention by LA Woman). Then there was the whole rejecting my past schtick that some of us trudge through but what I found most appalling was the Classic Rock re-branding of the band. I remember in 1980 leaving a bar one afternoon and picking up a hitchhiker. We asked him what kind of music he was into and he said the Doors. In my mind there was some much good new music out there that I could not fathom why this kid was listening to this old stuff (that I now dismissed), somewhat irrational, I know.

Now having gone back and listened to all of it again in the last couple of years it seems, for me, it was all downhill from the first record on (slight glimmers of hope in Morrison Hotel). And in context to it's era it's a great album and "Light my Fire" is really...well it stands alone.

Thanks again for the story (Yeah, the Rascals!)

Same declining level of interest for me, without feeling any great need to criticize them. The early experience of The Doors provided a really useful model for young musician playing frat houses, clubs & dances who needed to keep himself interested in thw music. Had the band not cracked under the usual pressures - poverty, dope, lack of gigs, etc., the guitarist & I might still be playing together informally to this day in his garage, trying out everything.