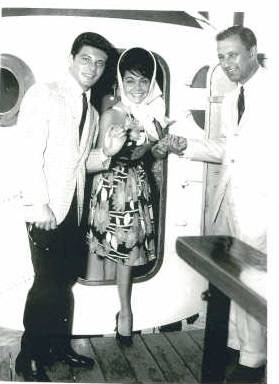 The first Beach Party movie was released in 1963, just as  I was entering full teenhood. There were plenty of good songs on the radio in 1963, but even I knew what passed for teen culture was generally bogus, product created by adults for teen consumption. The rock & roll Revolution of the mid-Fifties had been suppressed, the crazy rockers tamed or banished to country music & the Black radio stations. The Beach Party movies had little connection to the teen culture I was becoming  part of at the time, except that they happened to be part of teen culture merely by existing & being shown in local theaters.  They were staples of late night weekend TV for decades afterward. Frankie & Annette were hardly Southern California surfer types (they were "greasers," although we didn't use that term*),  were musically irrelevant (as was Elvis, for that matter), We laughed at Annette's frozen doos & obsession  with protecting her "virtue," but she was never an object of scorn. Everyone loved Annette. We'd all been fans of the Mickey Mouse Club. The movies themselves were harmless, funny - Harvey Lembeck's biker outlaw character Eric Von Zipper was great, & they were  filled with Hollywood's best jiggly go go dancers.

By the summer of '64 everything had changed, with the assassination of JFK & the arrival of The Beatles & the Brits.  The change was so great that something like a generation gap opened up between my sister & I, & she was only two years older, Class of '64.  But the beach party movies & the various spinoffs & imitations went on until 1967.

In 1987 Frankie & Annette reunited in a  funny parody of their old movies, Back to the Beach.   According to Frankie, Annette was showing early symptoms of multiple sclerosis, but he didn't know she had the disease & she may not have known it yet. She announced she had it in 1992, to counter rumors she was an alcoholic.

It might seem that Annette's immense talent  was underused. But she herself chose not to become an "adult" performer. She could have made sitcoms & dozens of made-for-TV movies  &  had a great Vegas & nightclub career for sure - definitely in tandem with Frankie Avalon, who still works Atlantic City. She just dabbled -  specials with Frankie, guest appearances on Love, American Style  & Fantasy Island. Apparently Annette really was Annette, not someone playing a character named Annette. I'm sure she ate Skippy Peanut Butter, & sold a lot of it.

*In my school the guys favored leather jackets, high roll collars, tight Italian cut pants & leather jackets, styled haircuts,  in contrast to the "collegiate" madras shirts & khaki  pants & "dry" look hair cuts that came in with the Beach Boys. They  were often called "hoods," an inaccurate, disparaging term, since most were just regular guys & we mixed quite freely in sports & socially, some of them were good  musicians I later played with in garage bands.