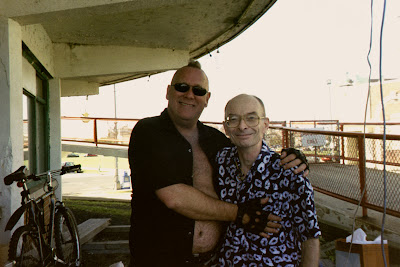 X-Ray Burns & I, live WFMU  broadcast from Asbury  Park of the Glen Jones Progamme with X-Ray Burns, a few years ago. . They broadcast a series of annual shows from the space age Howard Johnson's next to Convention Hall. For most of their broadcasts, the crowd they drew were pretty much the only people on the boardwalk on a sunny Summer Sunday afternoon, unless some event was at Convention Hall. The beaches were nearly deserted. One year there was a wedding, the next Patti Scialfi was rehearsing at the Paramount for a tour, Springsteen was there with his Corvette, I chatted with him  briefly as he was standing outside the theater but had left my camera back at my HoJo table. During those last two summers, the Asbury boardwalk was finally  reawakening, completely transforming itself in few years.  The Hojos is now a restaurant & nightclub. But who can say if Glen & X-Ray helped prevent its demolition?

These were were family events  with children & dogs in attendance.