President Obama's Second Inaugural  speech had a lot  less "we can all  work together" & a good deal more liberal heart  to it. It took him awhile to realize he doesn't just have opposition; he has enemies, & those enemies are well-represented in Congress. Not to directly compare his two speeches or the circumstances with those of the incomparable Abraham Lincoln, but he learned some similar lessons between One & Two. The hate isn't only for what the President does, but also for the man himself. No insult made to him is too vulgar; no lie too outrageous; & no threat can be treated as empty. 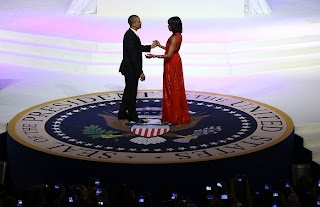 In retrospect, his 2008 win over McCain/Palin was too easy. The difficult part - getting an early edge on Hillary Clinton & hanging on to it - was put behind him in the  Convention Lovefest. Barack Obama wasn't all that seasoned a politician in the trenches of bitter, partisan warfare. He's probably consults Jimmy Carter & Bill & Hillary Clinton more often now on what he can do with Executive Action. I think the turning point for The President was ending "Don't Ask, Don't Tell" in the military, not health care reform. All wartime Presidents since Washington understood the American Armed forces are a laboratory  for permanent social change. I suspect Michelle Obama had a good deal of influence on the decision.

If he is not an extraordinary President, there is no doubt in my mind he is an extraordinary person. He has born with dignity  horrendous abuse, most of it motivated by racial bigotry. Neither of the two living Republican ex-presidents have joined in the cacophony  of irrational criticism. The air has become so foul with it that they have rarely  spoken out even on those serious issues in which their opinions might have weight.  Mitt Romney, who didn't sling enough shit at Barack Obama to suit his party's base, has already been disowned by them.

N.J. Gov. Chris Christie demonstrated  his traditional  values of state loyalty (yes, states rights) by doing whatever he had to do to get this broken state moving forward again after Hurricane Sandy, even though it meant cooperating with a Democratic President & Vice President near the close of a presidential election race.,later  berating his own  Republican leadership, & he  may have to pay a steep price for it  if he decides to run for President. Polls showed most Americans wanted the kind of bipartisan cooperation  shown by Christie & Obama in a time of disaster, but it won't play well to the hardcore Repug primary voters in 2016.

This time around the President isn't fooling himself. He's a more experienced & hardened politician. He won the election, & he let America know it.