It is more strange than true, driving home from work on a muggy evening, past what is usually a vacant lot and finding a carnival there, crammed into a square block of space and going full tilt. Like a midsummer night's dream, says Willie the Shake, when the imagination bodies forth the forms of things unknown and....and gives to airy nothing a local habitation and a name.

The carnival arrives bearing the name of a saint or a fire department, but these are phantom handles, as one might call a recurring mist by the things it shrouds. They never stay very long in one place. A few rides, a few games of chance, lots of food, drink, and children; designed to try a poor soul's patience, all to make us sport.

So the transformation of an ordinary piece of ground with tents, flashing lights, the steamy odors of open air cooking, and noise.

The rides are pee wee versions of a large amusement park's greater torments, prototype designs of the Grand Inquisitor. Tilt-a-Whirl has been a devilish fixture of these fairs for centuries. Its cars resemble snail shells twisting through shallow water, each with the capacity to fetch thee a case of mild whiplash from the deep.

The Gravitron, or whatever name it is given in the modern era, retains all the nausea-inducing charm of a spinning playground roundabout, providing the means to enrich one's pain, inflicting a parted eye, when everything becomes doubled.

Which leaves for the faint of heart the safer thrills of a small merry-go-round running before us, yet going no place. And a Ferris Wheel, from whose view all things shall be at peace. 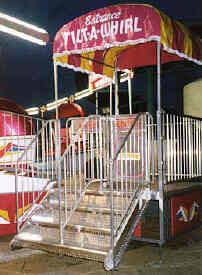 The wheels of chance advertise "One Win - Your Choice" of a cheap baseball cap or a tiny stuffed animal. From a distance, the odds of playing only four numbers looks so easy that one assumes they are almost giving away the prizes. But upon drawing closer, the wheel's notches break into an extended family of relatives: Mom, Pop, Sis, Bro, and in tiny print are Titania, Theseus, Helena, Puck, and Hermia, to cite a few. The wheel spins, a cartoon clock clicking until the spring snaps. Of course, someone else grabs the booty. What fools we mortals be to test dollars against such odds for a trivial reward. If this be true magic, the prizes would include purple grapes, green figs, glowworm's eyes and butterflies. Aside from love, this is the only game in town and, like love, not fixed in one's favor.

On to the food tables, to the clams, cheesesteaks and fried shrimp and fried pizza, where billows of aromatic smoke doth impair the seeing sense. Out, tawny tartar sauce, out loathsome medicine, O hated portions, hence. Bring me a bottle of A-1 or a bit of ketchup for my burger.

How now,  Mad Spirit? What night rules this haunted grove called the Beer Tent? Here is where every Jack shall have a Jill and naught shall go ill, although plastic cups of brew do spill and pheromones fly where they will. Like moths circling a flame they mistake for the moon, teenagers circumnavigate the beer tent fences, over-dressed and sweaty in the muggy evening air, hoping Cupid's arrow will strike. They have yet to learn that love looks not with bloodshot eyes, but with the mind. Perhaps, in the garish light of the carnival, these callow homeboys and awkward girls who ignore each other at the 7-Eleven will somehow beguile themselves with the fantasies of the purest doo wop.

So quick bright things come to a confusion. One hundred young divorcees rolling baby strollers over the toes of strangers. Hairy men reving up chrome Harleys behind the Port-O-Sans. Melted ice cream oozing from the clothing of fat children. Rows of imperturbable crones and geezers nodding off in lawn chairs. The hour of the climactic 50/50 drawing draws nigh. Cops with bright orange vests blow whistles, dodging wayward drivers blinded by migraines.  Ladies and gentlemen, my amplified voice calls your attention to this corner of an eternal now. And the winning number is, and the winning number was. Oh weary night, abate thy hours!

It is all gone the next day but for a few paper cups tumbling across the worn and trodden grass, and torn posters waving from telephone polls, and overflowing trash cans; the place quickly released from the spell of a peculiar magick. A wandering midsummer night's carnival briefly lightens the heavy gait of night, then carried to the next town, the next empty parking lot, the next field of fireflies, to awaken there by balmy starlight the nimble, if fleeting, spirit of mirth. 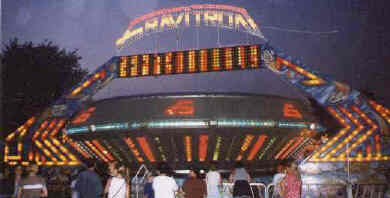 © Bob Rixon 2001
An earlier version of this essay was published by Worrall Community Newspapers.

Thanks. This was originally published as a column in weekly newspaper, as were, over in the sidebar, The Roof Dancers, A Jersey Boomer, & Angels at the Jersey Shore, also used as radio monologues. I was inpired to do these kinds of pieces by what columnists in major daily newspapers were writing 80 years ago. One columnist, Don Marquis invented a talking cockroach named Archy who typed free verse columns by diving headfirst on to typewriter keys. & I had a purpose: I believed the column was an ideal medium for a poet to speak to people in one's community who didn't read poetry.