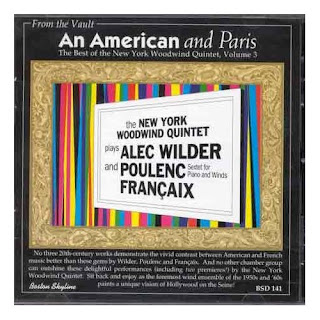 Alec Wilder straddled the pop & "art" music worlds in a way Gershwin never did, because Wilder didn't pay much attention to the borders between them. Gershwin was obsessed with them.   A great songwriter, he also may be our best all-around composer of lighter chamber music. He composed for all kinds of combinations of instruments, as documented in this list.  Frank Sinatra conducted several sessions of Wilder's instrumental music. Like the first great composer of woodwind quintets, Anton Reicha - an adventurous Czech composer based in Paris, & a contemporary of Beethoven, Wilder composed for & in collaboration with a specific group of virtuoso instrumentalists, the members of the NYWQ.

Wilder composed 13 works for woodwind quintet. The three on this CD were recorded for Concert Disc, an independent label created by a member of the great Fine Arts String Quartet to showcase their performnces, then re-released on the now defunct Boston Skyline label.