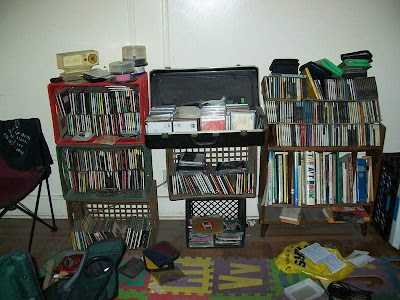 My entire modest CD collection, except a small box of rejects stored away, a few stacked near the PC & a few more by the boombox next to the futon.  About 90%  of the plastic cases are classical.  The wallets are mostly rock, jazz, & international, I have other sources for those. There's my Sears AM radio, & a shelf of mainly art reference books.  I  began buying CDs only about ten years ago. They were too expensive . But my sources  for plentiful free music didn't include much classical , & having stepped away from a weekly radio show I had time to listen to  classical music again.  The first  classical  CDs I got were an inexpensive box of Beethoven's symphonies, & boxes  of his middle & late string quartets. I still go for bargains.

With classical music, I prefer having only one or two new albums at a time.   I can't audition & blow through them like pop & rock. I investigate & choose.

The black case in the middle is Russian & Eastern European.  Below in a crate is  British, on the bottom some miscellaneous.  On the right are Beethoven, Mozart, Bach, Haydn, Handel, baroque, early music, & the bottom row is vocal music, some opera, art song, choral, & the books.   On the left there's some jazz, American - much Charles Ives,  compilations, a few soundtracks, German & Viennese from Brahms on, French, a couple of Japanese composers, & a small selection of pop & rock.

Older avant garde & experimental records  are  easy to find for free ripped to  mp3 (or FLAC)  if you're not looking for anything in particular. Most of it  was released on now-defunct labels, & there's music blogs devoted to it. More difficult if you want something specific in classical, & to obtain it legally, although I don't see much difference between buying an in-print CD used & cheap,   or downloading an file for free. A friend noted you're not helping the American auto worker by buying a used Ford; you might be doing your local repair shop a big favor. So when I wanted a top quality recording of Janacek's two  masterpiece string quartets, I put several on my Amazon wish list & waited, & within a week one showed up for $1.99. I also fancied exploring some unfamiliar woodwind quintet music & found a highly praised CD of Scandinavian works for one cent, the bookstore made about  buck profit on $2.98 shipping.

Share |
Comments:
I ripped my CD collection - and a handful of vinyl - to iTunes several years ago. It probably took 12 months to do, as I'd pop a CD in my Mac, set it to convert the songs to MP3s and then forget about it for a day or two.

I have many boxes of records stored in the closet, & many of those I kept for only a couple of cuts. Most of the classical music I get on CD isn't available as download, & buying a used or cutout CD is cheaper anyway.