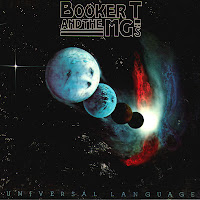 I've liked Universal Language (Asylum, 1977) from the time I fished it out of a cut-out bin not very long after it was released. Booker T and the M.G.s recorded many good to great songs for their albums, but they were not an album band. Melting Pot, their final Stax release, often cited as their best, is really half-a-great album. McLemore Avenue, a brave, complete cover of Abbey Road (sequenced differently into medleys), is unusual, & terrific in places, but not entirely successful, & the band would've been served better by a broader all-Beatles record. I think the soundtrack from Uptight is their most satisfying LP, but this one is pretty good.

Versatile Stax session drummer Willie Hall takes over Al Jackson Jr's chair, with less personality, nearly as economical, & he fits the group better than any other drummer I could think of. There's only one really synthed up cut. Synths show up elsewhere more as flavoring. Generally organ centered with some electric piano. Steve Cropper stretches himself on guitar with some of his finest solos. There are a few nods to the disco dance floor, but otherwise this is a funky Seventies LP, the M.G.s sound updated a bit. All the songs but one are band originals, & there's not a bad or throwaway cut on the LP. "Moto Cross" is one of my favorite M.G.s numbers period. I don't understand why Universal Language is so neglected, never released on CD. Enjoy these six selections.