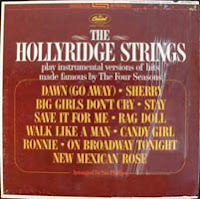 The Hollyridge Strings sold a lot of albums in the Sixties, mostly collections of songs - "songbooks" - by one band or artist. Nearly all out of print now, but selections from the Beach Boys Songbook CD reissue are played before Brian Wilson concerts. Of the Four Seasons Songbook, it is peculiar to hear "Walk Like A Man" & "Big Girls Don't Cry" & other songs featuring Frankie Valli's shrill falsetto done in lush string orchestra arrangements.

Closer to the original, but not by much, is the version by The Bob Crewe Orchestra. Bob Crewe was the fifth Season, as their producer, songwriting collaborator, & one of the architects of their sound, which makes his album of Four Seasons songs a real curiosity. Crewe's big instrumental hit was "Music to Watch Girls By."


Thanks to the devoted collectors who rip these rare LPs from vinyl.