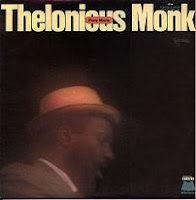 In honor of the day, here's one of my favorite records never released on CD, Pure Monk, a 1973 two disk collection of Thelonious Monk solo piano tracks from his '50s Riverside LPs, compiled by original producer Orrin Keepnews, with fine liner notes. Two sides of Monk originals & two sides of covers - Monk's taste in songs was peculiar at times. Everything is available on CDs & downloads, but not in this package. I may have received the album as a gift. It was revelatory to me to hear Monk break apart & reconstruct an obscure song like "There's Danger In Your Eyes, Cherie," & what he did with Eubie Blake's "Memories of You," & have two takes of "Functional" one after the other, a number I'd known only in band arrangements. It's a composer's intimate diary of ideas & influences. I wonder if, like French composer Oliver Messiaen, Monk listened closely to bird calls. If forced to list ten of the greatest records I ever had - I'm not big on that kind of thing - this would be near the top.

Later, I met & got to know Peter Keepnews, Orrin's son, who is happily married to WFMU DJ Irene Trudel.