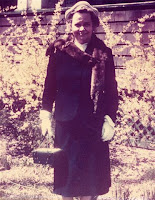 I know it's a funny photo. It was funny when it came on the screen during family slide shows. But not "haha" funny. You're looking at a matriarch. Well, she thought she was & acted accordingly. Her younger sisters probably just thought she was pushy & a busybody. Maybe, because it's funny, I avoided having it scanned. & here you have click on it, & it's still a low res photo. The original print is larger. Maybe I delayed because it's Easter & she's dressed up for the occasion. She's going to Mass at St. Joseph. Maybe dad drove her. She usually walked. It was a long walk. Dad posed her in front of a neighbor's house because we had no forsythia. We thought that was funny, too. A year or two after this photo, I think, she moved to Atlantic City & sold the house to my parents. We were kind of glad to see her go, the oldest brother overjoyed. My sister got her big room, my oldest brother got my sister's small room. We may have even thought she was a problem. She wasn't much of a problem, as it turned out. There were other problems. My niece has her maiden name as a middle name.

I've never captured her in poem or prose. There's two poems, one published & the other too personal - it recounts a dream. She's one of the "Angels at the Jersey Shore." In "The Roof Dancers" she mediates a dispute with some annoying mythical little people with whom, it is hinted, she had previously battled. "Boardwalk" is dedicated to her. There was never any question it would be. The poem would have baffled her. Those are all linked in the sidebar.

My apologies to Nana for exposing her. The photo is too good not to share.

Share |
Comments:
"The poem would have baffled her." That's as lovely as the neighbor's forsythia :)