New York City hippies were scary. They were grungy, street-wise, pestiferous beggars from the Lower East Side long before it gentrified. They did any & every drug. The peace-love stuff was just a cover. Three New York bands I associate with the time, The Fugs, Velvet Underground, & Blues Magoos, included sinister looking long hairs.. The Mothers of Invention, older musicians satirically disguised as hippie types, were also based in the city for an extended engagement. New York (along with L.A.) was an instructive counterpoint to the smarmy (& inaccurate) flower child image San Francisco projected, & picked up by suburban hippie kids. Late in that era, just before the first signs of punk appeared downtown, I briefly joined a New York band, & quit in a hurry when I realized the two scraggly, untalented leaders were supporting themselves by importing serious amounts of serious drugs from the West Coast in five gallon pails of organic peanut butter. They weren't at all like the genial, harmless pot dealers hanging around the college music scene in New Brunswick NJ. I was way out of my element & I knew it. 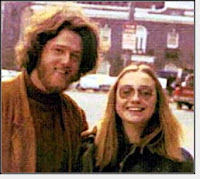 Maybe that's why the performance by the cast of the Hair revival on Letterman last night unnerved me a little bit; they looked like New York hippies. The costume & makeup artists did a good job. When they scattered through the audience during "Let the Sunshine In" there was nothing sunny about the enthusiasm, & had I been sitting there, my reaction would've been "Get the hell away from me!" Even knowing they were just a bunch of actors & I was safe in the Ed Sullivan Theater.

(I know. The photo is of faux hippies from New Haven.)

Share |
Comments:
New York punks - at least the ones I encountered in the East Village 20 years ago were probably on as many drugs as your hippies, although they were dressed all in black when they panhandled me. What I remembered most was how gaunt and pale they looked, and I don't they looked that way because they were going through a Peter Murphy phase.

Punks were honest enough not to flash the peace sign & go through some peace & love bullshit. Turned out it was The Stooges & MC5 in the Sixties that saw America was headed into the toilet, not into the Age of Aquarius.