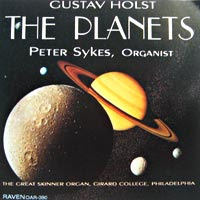 Gustav Holst, The Planets, transcribed for organ & performed by Peter Sykes (Raven).
A disappointment. Like the "1812 Overture," Holst's astrologically-inspired masterpiece became one of the big classical crossover hits with the introduction of the long-playing high fidelity recording. Everyone knows "Mars" & "Jupiter," if not the source (A snippet of "Jupiter" is currently heard in a TV candy commercial). There are many fine orchestral recordings. Japanese composer Tomita made a silly space opera synth adaptation in 1976 that still sells. The Planets would seem ideal for a grandiose organ arrangement. So what went wrong with this one?

Holst's own entertaining piano transcription is for four hands & two pianos; I assume that's what the composer thought was needed to do justice to the bare framework of music that relies so much on his wonderful orchestration. Peter Sykes limits himself to two hands & two feet with occasional assistance. It's an earnest, thoughtful transcription, & it may be adequate. But I can't tell. Because for the recording, Sykes chose a large, lush organ in a very resonant room, The Great Skinner Organ at Girard College in Philadelphia. From the outset, with the famous skewed, ominous, martial rhythm of "Mars," too many rhythmic & melodic details are sunk in the ambient mush of Girard Chapel. So all the emphasis placed on the history & grandness of the instrument in the liner notes is pointless. It was the wrong organ for the task. Clarity is lost where it is most needed. Instead, we get a thick fog of sonorities, & a sluggish wind machine that can't keep up with the performer. Does it matter which stops & couplings he's using? Perhaps Sykes could have rescued some of those passages (big problems in "Jupiter, the Bringer of Jollity" & "Uranus, the Magician") with a more creative use of rests & silences. It's unlikely he could hear himself very well as he performed. He couldn't simultaneously be at the console & out front where all this pipe organ sound blended together. Of the 7 movements, quiet, ethereal "Neptune" most impresses me, although the fade is too drawn out.

Any keyboard transcription of an orchestral work qualifies as a novelty. Here, the novel aspect wasn't pushed far enough. The Planets might sound terrific performed on a restored Wurlitzer theater organ with all the stops pulled out, so to speak. Sykes, an accomplished classical organist, put his heart into this thing, & it's an admirable effort. But I wish he'd stretched more, risked more, & reached for an offbeat pop masterwork, like the original has become. This needs the spirit of George Wright. 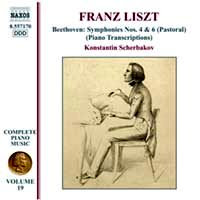 Beethoven, Symphonies Nos. 4 & 6 (Pastoral), transcribed for piano by Franz Liszt, performed by Konstantin Scherbakov (Naxos).
Liszt transcribed the Pastoral early in his concert career, & was persuaded to complete all of them - including the choral 9th - after he had retired from touring. Although difficult to play, the transcriptions weren't made to show off. Liszt idolized Beethoven. It's likely that few in his provincial recital audiences had ever heard Beethoven symphonies performed by a full orchestra. Liszt was doing them & Beethoven a service by playing all or part of a symphony.

The Pastoral is Beethoven's most cheerful symphony. Peasants sing & dance during a day in the countryside, a thunderstorm arrives, then blows away. That's about it as a "program." This is very familiar music. No. 4 is filled with mischievous humor from the first bars through the last. Both are good candidates for piano transcriptions, & Liszt does them up with musical intelligence, respect for the originals, & an ear for the piano's capacities - & limitations. Liszt's necessary use of tremolo & arpeggiated chords to convey string parts sounds to our ears like corny music for old silent movies. Many of those movie theater pianists did incorporate classical orchestral music, which was taken up by Hollywood composers with the arrival of "talkies." We still hear syrup & thunderstorms in soundtrack music. I just laugh it off. These transcriptions are meant to entertain. I really enjoy this recording. I can't compare Scherbakov with how other pianists have handled these works. He sounds fine to me, & he's received uniformly warm reviews for his set of all nine on Naxos. I don't plan on collecting them.