The final episode of ER aired last night. I forgot to watch. I meant to. That pretty much sums up my relationship with the show. I never watched it during the George Clooney/Dr. Ross era. Then I began watching late night weekend reruns. I may have picked up the show in primetime during season six or seven & followed it - though not faithfully - through season 11, when Dr. Carter & 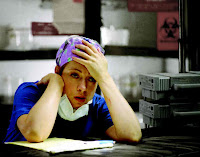 Dr. Elizabeth Corday left. I enjoyed Dr. Robert "Rocket" Romano, the insufferable, bigoted yet brilliant & oddly vulnerable surgeon whose tragic accident & decline (& death) became maybe the show's most bizarre minor storyline. But I skipped episodes. As a new ER staff took over I lost interest in learning new characters. As with M.A.S.H., there was too much sanctification of older characters. & because of how long it took the years of reruns to cycle through & pick up at the beginning, I never had a clear grasp of the backstories & the sequence of events & love affairs. When (in rerun) nurse Carol quit & went to Seattle to reunite with Dr. Ross, the whole bit was so fuzzy & romantic that I concluded she'd had a complete psychotic break & it had been a hallucination. They could've kept churning out episodes of ER for seasons to come. It was a gold mine for actors & writers on their way up or capping careers. The ER itself was terribly abused with explosions, fires, murders, crashes, hostage situations, epidemics, & radioactive leaks. It should be turned into an amusement park ride.