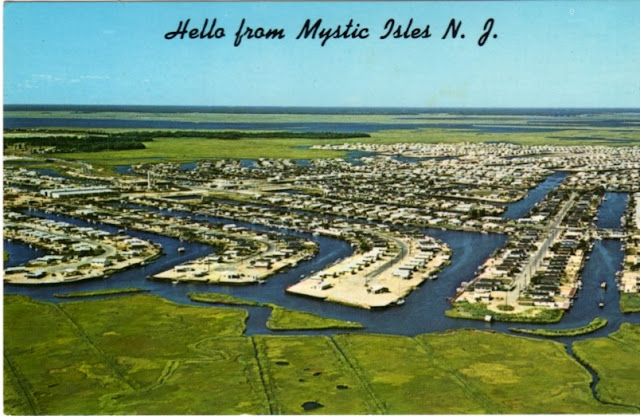 I have a number of postcard images of these kinds of places. As as a kid, I sensed that there was something very wrong about them. Not that I would have objected to living on landfill next to a dredged canal. But it was clearly different than building on dry land & sandy barrier beaches. I thought of the South Jersey bay marshes as wild & pristine, accessible only by shallow draft boats or brave people wearing hip boots. I was unaware that these enormous, flat, tidal expanses had been farmed for salt hay since colonial times, & were still harvested along Delaware Bay. I only explored the edges, collecting cattails & poison ivy rashes. When they were built, anyone objecting to the massive, permanent destruction of wetlands was considered a kook. This was progress, inevitable & unstoppable. The environmental movement & changes in laws slowed but failed to halt the ravages. Once these marshes were established as "land," they remained real estate. So the small prefab vacation houses constructed on sand have been razed & replaced with large houses built on pilings. Although some of the lagoons are silted up & barely navigable. Bay culture has gone to museums, & the environment degraded beyond reclamation, at least until global warming raises the sea level enough to flood the developments with every nor'easter & monthly moon tide.