Whenever there's a devastating tornado, hurricane, flood, wildfire, entire neighborhoods of two bedroom prefabs are wiped out. Often they are pleasant homes, well-maintained, & sometimes not so pleasant. What's long puzzled me is why the people in those houses believe they are middle class. It's one of the great bamboozlements, a hugely successful ruse, foisted upon Americans by the upper classes, mainly through control of the popular culture, & the use of culture in bending political opinion with misdirection. I think of Hank Hill in the cartoon series, King of the Hill. I like the cartoon family. They're more "realistic" than any filmed sitcom. Some episodes are tweaked into fantastic scenarios, others given over to ordinary family dillemmas in which Hank & 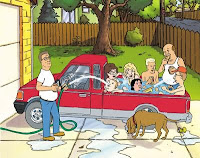 Peggy, decent church folks in Texas, squirm through situations requiring ethical adjustments that don't resolve easily using the hard, either/or Biblical morality they probably get from the preacher in the pulpit.Peggy, though naive in some ways, is more knowing of human foibles & desire, & more adaptable than Hank. The puzzlement is why Hank & Peggy think they're in the middle class. Hank's possession of a lawn tractor for his small yard, his middle class bling, may push him over an illusory line. Upper middle class guys also drive their tractors for kicks, but contract landscapers for lawn maintanance. But it's how the Hills think, the reflection they see of themselves. They're clearly only a couple of paychecks away from economic disaster - episodes have dealt with the possibility. Hank has a capricious boss at the propane depot. Peggy is better educated & is a resourceful Jill-of-all-trades, but at heart she's an old-fashioned homemaker & volunteer do-gooder. The son, Bobby, is a pudgy, unathletic impulsive kid who wants mostly to be accepted & liked (Hank is a "Glory Days" high school football type). They aren't financially secure. Nor, so far as I can tell, are any of Hank's beer-drinking buddies.

Hank's street in Arlen, Texas is the kind of neighborhood we see on the news in a pile of rubble flattened by an F-4 twister, including Hank's manufactured house that looks all of 600 sq ft. It's also, I would imagine, overwhelmingly Republican. Hank believes he has a freedom & flexibility in his life that just isn't there. He doesn't try to exercise enough liberties to understand how few he really has. Hank has a common, largely unwarranted hubris regarding his position & importance in America's economic scheme. Hank would consider a politicized class consciousness as unpatriotic, even unamerican.

In my town, the Hank Hills were union guys, & they earned better than Hank, & most had larger homes, old frames & newer split-levels, & some smaller houses that grew dormers & finished basements, & they were patriotic enough to have risked their asses for America.

There were two kinds of people in my town with second, summer homes. One were the professional guys, the lawyers, accountants, business-owners, a few Wall Streeters & upper middle-management. They had vacation homes on the lakes in North Jersey & on Long Beach Island (not as upscale then as now, but no bargain). There weren't a whole lot of them in town. The others were autoworkers at the GM & Ford plants, & skilled tradesmen, who jumped at overtime & got good financial advice somewhere. Union men all. They had places in the new developments around Seaside Heights & Barnegat Bay ranging from cottages on dredged bayfront canals to very modest 1/2 shacks in locations with names like Ocean Beach 1, 2, & 3. Environmental disasters for the most part, but hardly anyone raised that issue at the time. These union dads, for all their griping about union dues & shop stewards, had tough, adversarial attitudes toward corporate management. They came from struggling ethnic neighborhoods in Jersey City, Bayonne, Newark, Brooklyn, growing up during the Great Depression, they liberated themselves at they same time they liberated the world from Hitler & Tojo. Italians, Irish, Polish, Germans, Catholics & protestants. My town was a big step up for them, one square mile of safety & whiteness where nobody was too rich or too poor (with a few notable exceptions). They thought of themselves as working class even as their incomes surpassed the average white collar families in town. There was, in these union families, so much pride in going to college that many of my friends & acquaintances became teachers even though that meant earning less than their fathers. The encouraged career goal was clean, physically undemanding work in jobs with no layoffs.

I recall one dad, who had a house down the shore & two late model vehicles in his driveway, sitting at a picnic table on the lovely patio behind his house, still wearing his GM assembly line work clothes, drinking a Schlitz after supper in the cool spring twilight, saying to a collection of bored adolescents, "Don't do what I do." The surroundings suggested that we ought to do what he did, follow in his footsteps. But what he did was the same thing day in day out, with no variety, whipped along by time management experts who came down from the offices carrying clipboards, wearing ties & hard hats. For his lifestyle he relied entirely on his union contract & the desire of the American consumer to purchase the cars his employer was selling, which he knew were absurdly designed. He, in fact like Hank Hill, drove a very plain, very reliable red pickup truck, but from his own factory,* a steel box in the bed holding his fishing gear for quick Friday getaways. In the summer, his wife & kids relocated down the shore while he stayed in town during the week by himself, a separation he admitted, with a chuckle, didn't bother him, as he ate his suppers at the Legion Hall or Peterson's (a legendary hot hog & burger stand), watched ballgames on TV in peace, & went to bed earlier. He was good guy. His son became a high school history teacher. A union man, too.

The unions are largely gone. But we need the old union anger, the union understanding of have & have nots. We need to understand that the political message out of Washington D.C. & the front offices has been for years, relentlessly, successfully, that the people who are have nots or have not much are really part of the haves; that they are haves even as wages & the standard of living drop & wealth flows ever upward, carrying few with it.

* He bragged that every worker from the railroad dock to the storage lot driver knew his truck was coming through. No way to verify the claim.