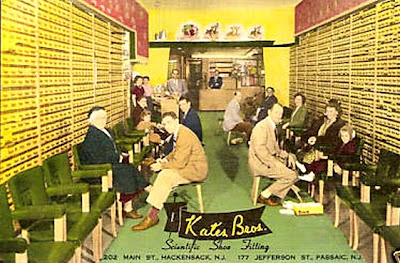 Kates Bros. shoe store, Hackensack NJ
Scientific Shoe Fitting
There must be people under a certain age (& economic level) who have never bought shoes in a store where a sales person measures your feet with a strange implement, brings the style of shoes you select to you, takes them out of the box, shoehorns them on your feet, laces & ties them for you, then leans back while you walk around testing them. As a kid, I thought it a peculiar occupation, & I didn't like strange men touching my feet. But good shoes weren't cheap then or now. Jerry's Dept. Store in Roselle Park had a weird x ray machine to fit the shoes Jerry himself wore & swore by; a special order, custom made line of what later were called "Earth shoes," although I never saw anyone else around town wearing them. He also stocked Buster Brown, which offered Mary Janes for local Lolitas.

The last time I bought shoes in mall shoe store, a pricey pair of boots, a bored sales girl just handed me the box & I had to try them on & lace them up without help, twice because she didn't measure my feet & the first pair were too small. & she got a commission!