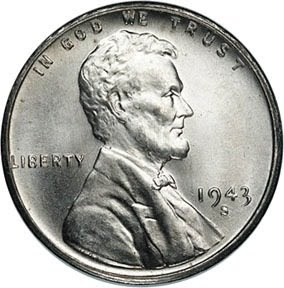 The 1943 steel penny, only regular-issue United States coin that can be picked up with a magnet. Common in collections, rare in circulation. If you have a big jar of pennies look for one before dumping it in a Coinstar.

No hurry to celebrate Lincoln's big birthday. I'm reading essays, Our Lincoln, New Perspective on Lincoln and His World, edited by Eric Foner. On the dry side, like Bill Moyers, who recommended it. Contributors include two from Princeton, one each from Columbia, CUNY, Yale, Penn State, U Mass, Met Museum of Art, Oxford England, Queen's College Belfast. One might ask if this is a Yankee slant, or if such a slant is still possible in mainstream Lincoln studies. (Of course, it is. You can always tell who James M. McPherson is rooting for.)

Also read an entertaining little book by Jan Morris, Lincoln, A Foreigner's Quest (2000). Morris is of the breed of Brits who fell in love with America, lived & traveled here extensively for 50 years. She took a tour of Lincoln monuments & historical sites, many of them obscure. She accepts some long-discredited Lincoln myths, & the book has glaring factual errors, but the writing is relaxed, she's a charming guide, observant, tolerant. The book is also about the Americans she meets on her quest, & the scenery around the sites.

The worse "historical" Lincoln writing I've read is by Carl Sandburg, which largely shaped my parents' generation's view of Lincoln. His books were very popular, influenced the old movie portrayals of Lincoln. Sandburg bought into nearly all the anecdotal stuff. But as a leftist, Sandburg had an agenda. He was playing Homer & trying to script Lincoln as an American Literary Epic Hero by gathering together the various threads of popular Lincoln narrative, heavily anecdotal, that were well-established while he was growing up in Illinois in the late-19th Century. Ambitious goal. I dismissed Sandburg when I read him years ago. Now I'm interested in the cultural impact of his propaganda, & his ultimate failure as an epic prose poet. Sandburg's Lincoln is its own history. This writing has value because Sandburg's Lincoln is still very much alive in popular imagination, as evidenced in the book by Jan Morris, from the people she met, & in her own view.

How does the anecdotal Lincoln survive in an era of strict scholarship & specialization? I read a suspicious Lincoln quote on a box of Celestial Seasonings tea. There it was, in print, so it must be true. But no matter where I looked, no source put those words in Lincoln's mouth or pointed to his writing. I went around & around. Couldn't even find a citation that might indicate the quote was pure invention. It was just accepted as something from Lincoln. One might as well have Lincoln saying, "I drink Celestial Seasoning teas."

Share |
Comments:
To celebrate the day, my mother took my son to the toy store and bought him a box of Lincoln Logs.