A president leaving office after 8 years no wiser than when he entered it. That must be a "first" in American history. 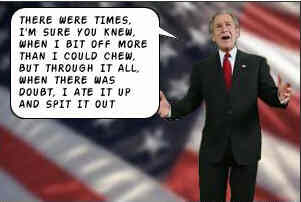 One only has to recall President Eisenhower's Farewell Address, a speech concerned with balances, & a fair statement of the Republican suspicion of large government. It is a troubling speech still, for the prophetic warning of a "military-industrial complex" that controls our national defense more than ever; & because Eisenhower had known this for years without speaking out, in large part because the temper of the era prevented such criticism within the political mainstream. John Kennedy ran for president & won charging falsely that America had a "missile gap" with the Soviet Union. But Ike had wisdom. George has wiseass.

The single legitimate-sounding claim made for the "success" of the Bush administration is that America has suffered no further terrorist attacks on our homeland (from the outside. American suffers much homegrown domestic terrorism). There is no proof that the excessive measures used by the Bush administration - including the invasion of Iraq - were necessary to prevent attacks, of if they even did. Push a burning house over Niagara Falls & of course the fire will be extinguished, but it won't explain why there aren't more fires. 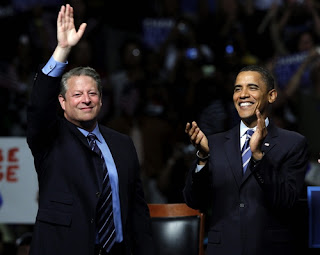 The world is no safer, & the global economic malaise & diminished American leadership & example makes it all the more dangerous. Most of the world welcomes Barack Obama not because he'll present a weaker America, but because he promises a better America. He has to deliver on the promise, but the fact that we elected him so decisively - no vote count shenanigans changing the outcome this time - was our message to the world that we want to return to our ideals, & the election of the first black president itself demonstrates & advances those ideals, our "Yes, we can" in the most significant way we could.

We have risked much, placing our hopes in Obama & the responsibility on his shoulders. But look at where we are as Bush leaves office? Obama's unwillingness to steer as far left as I would like, his reliance on "establishment" politicians for advisers & cabinet, his friendly overtures to people I consider ideological enemies, is a candid admission of his need for cooperation & experienced counsel, & of his unwillingness to enter office on a tone of partisanship (although I think he will be forced to go there to get what wants). His confidence resides in proven capacity to lead, learn, make his own decisions, & meet challenges - in those he has few if any doubts. Unlike the outgoing president, he is not a facade for a closet junta presidency. There is no Cheney, no Rove, no Rumsfeld, no stink of a coup d’état ruling from "undisclosed" locations. Obama has in his administration several of the biggest egos in American politics, people who believe they can do his job in a perilous time, & even campaigned for it.

George W. Bush is convinced history will vindicate him on Iraq, & maybe it will. But that's all he has. He has been a disaster in the present. He leaves office with a worse reputation than Richard Nixon upon resigning. He doesn't even get a good will farewell bump from the American people in the polls. Democrats, Republicans, & independents have joined together in saying, "Good riddance."