The pipe organ is an obsolete instrument. Both church & theater organs have great performers & devoted fans, but the pipe organ has been a sideshow in the musical circus for over 200 years, a fact not an opinion. Contemporary composers specializing in organ are known mainly to organists, & most are themselves performers composing first for themselves. There is always a market for new liturgical music & hymn settings, less so for concert pieces. The instrument endures because organ music endures. You want a pipe organ, there are at least 100 companies that will build you one. 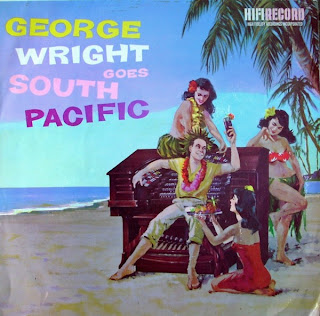 Repertoire is the weakness of most theater organ albums. The theater (or "civic") organ's heyday ended in the 1940s. Before then, there were pipe organs everywhere; movie theaters, skating rinks, dance halls, stadiums, restaurants, Elks Clubs, even high schools - Atlantic City High had a marvelous organ. The theater organ always had a nostalgic quality. Beginning with the pipe organ restoration movement in 1950's, nostalgia became the main attraction. Theater organs were preserved, restored, & played to recall an earlier era; they are historical artifacts. When you attend a theater organ concert you hear oldies, light classical, patriotic songs & marches, novelties, maybe a few recent show tunes. They're fun concerts, I recommend them, but theater organ recordings exist mainly as souvenirs to demonstrate the qualities of the organs & skills of the organists. Theater organs are difficult to master - no two are exactly alike in design or sound, & the best performers today are virtuosos - most are part timers - who travel around America & Europe giving audiences what they want: a Trip Down Memory Lane with some corn & razzmatazz, on precious instruments local theater organ societies put lots of money & work into saving.

One theater organist refused to become musically irrelevant in the 1950s - his name was George Wright, & he was only in his thirties. He had been organist for a number of years at the famous Paramount Theater in New York (that organ is now in Wichita), & on network radio, jobs that had required not only the playing of oldies & novelties, but also Hit Parade pop songs, & he had cut many 78's. He was a flamboyant artist, brilliant performer, interesting arranger, musically broad-minded. He moved back to California in the early Fifties (at some point he became staff organist for the soap General Hospital). There he hooked up with Richard Vaughan, whose home studio contained the pipe organ from Chicago's Paradise Theater. Vaughan had the expertise to make first rate recordings of the instrument using the new multitrack magnetic tape. Wright made a deal with Vaughan to record LPs on Vaughan's small indie label, Hi-Fi, in return for having control over what he put on those LPs. He included all kinds of music on some 20 Hi-Fi albums, a something for everyone approach. The albums sounded great & sold very well - millions in all. Two of his very best LPs were recordings of the scores from South Pacific & My Fair Lady. There were many well known theater organists, & innumerable pipe organ records were produced in the Fifties & Sixties, some intended to test the limits of record player speakers, but George Wright was one of the few theater organists who really thought of himself as a contemporary pop artist, & marketed himself as one. He didn't change the course of pop music - rock & roll did that. His albums were designed to have wide appeal. Turns out they had lasting appeal, too. Many of his albums for Hi-Fi were remastered for the digital era.

With its collectable jacket of George sitting at a Wurlitzer on a beach raising a tropical toast to three island beauties, George Wright Goes South Pacific was one of the better pop "concept" albums of the Fifties. Like DJ Allan Freed, George might have said he never played a song he didn't like - he plays them all that way, but he clearly loved the music from South Pacific. In fact, all Richard Rodgers tunes sound good on a Wurlitzer. I have my theory of why this is so (almost needless to say, no American has composed better waltzes). By taking on an entire Broadway score, George challenged himself to run some songs through the Wurlitzer one wouldn't expect to hear on the beast.