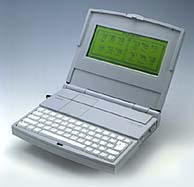 Here's a "laptop" I still have (one of several antiques). It's a Brother Super Powernote portable word processor. I picked it up on eBay before the turn of the century for about $75, mainly to input setlists during radio shows before WFMU instituted program archiving & real time song posting. But I did a lot of writing on it at a local coffeehouse. It has an LCD screen impossible to see in bright light. Internal memory is 63K & it takes a standard floppy disk, easy to save & transfer files in text or better using conversion software. There was an optional 2400 baud modem, an instant relic. Very nice clock & alarm function, Lotus, & a Tetris game. 300 page owner's manual I rarely needed to consult.. A solid, compact 4 pounds. It's a beautifully designed machine, but had no chance on the market, Brother trying to sell it in the 90's just before Windows 95 & the internet changed the universe & ISPs had to stop charging by the hour. The last time I tried it the Brother battery no longer held a charge. I opened up the Powernote on the train once & a couple of guys across the aisle from me with expensive laptops went nuts, they loved it. Some of the similar old Tandys are collectables. They especially wanted to see the Tetris. They looked so disappointed when I left the train. Brother tried once more to create a low end, internet-ready laptop, a contraption with a crazy operating system, no hard drive, & impossible to upgrade. By that time you could buy a used Thinkpad with twice the capacity & functions for less money.

Brother & my beloved Smith-Corona made some excellent memory word processors in the 70's & 80's. But their developers could not see what was right in front of their eyes in computer technology. They kept thinking like typewriter companies. More on this this when I post on my two Smith-Coronas.

There's a lively market in Atari systems on eBay, for under $100 you could recapture your innocent years. Mrs. Contrarian might not be thrilled. Although she'd spend that much in 15 minutes in Borders. So would you for that matter.

Do you know, is it possible to purchase a Battery Pack, BA-4000 for the Brother Super PowerNote any longer? If you want to respond via email my address is:

Thank you so much, Jeanie

Hi,
I have two Brother Super Powernote laptops, PN-8500MDS. Both units are in working condition, but no batteries. I use modified 9volt, 1amp powerpacks to provide onboard power. Input powe plug configuration is as follows: Centre pin = earth, Outer ring = positive.
I'm on the lookout for working software, 3.5 floppy disk?
johnwalding@kinect.co.nz

I loved my Super PowerNote and I still have it, mostly for nostalgic reasons. I wrote some award winning scripts on it and it paid for itself!

I just purchased a Brother Super Powernote laptops, PN-8500MDS off Shopgoodwill and it cost me $14.55. Unbelieveable! Now I can type my book out and put it on floppy. Thank Goodness I have an old laptop that would bring the text up.

Hey I have two of them for sale would you
Like to buy them ? They both still hold
Their battery charges plus I have extra
Batteries and adapters

Got mine today and I love it, it also came with some floppy disk and ond if them had a diary entry on it