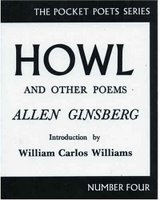 Howl by Allen Ginsberg was published 50 years ago this fall. This poem & the slim volume containing it changed American poetry, changed American culture, & changed America. It was beautiful, troubling, angry, subversive, spiritually powerful, & wonderfully portable in the inexpensive City Lights Pocket Poets edition. Ginsberg was to American letters what Elvis was to American music, & at the same time; a decade after World War Two, when the United States had become all too comfortable with itself. In addition to making Ginsberg famous, the controversy surrounding Howl as an "obscene" book & subsequent trial ended as a great victory for free speech.

I discovered a copy of Howl on my oldest brother's bedroom bookshelves when I was 12 & looking for an alternative to my mom's Harold Robbins paperbacks. I thought, hey, this is real beatnik stuff, it must be dirty. Disappointingly, Howl had nothing in it like the sex passages in potboiler novels, just a few "bad" words, & it didn't make a lot of sense. Yet, it felt like something I ought not be reading. Up to that point, my idea of a modern poet was Robert Frost, an old man, whose most famous poems, like "Mending Wall," could be appreciated in a fairly literal story-telling way by a kid. I went back to it again & again, & found other poetry books & magazines in my brother's room, which he had brought back from New York City. It was my brother who first told me Allen Ginsberg wasn't a "beatnik," & in fact there was no such animal; it was a derisive word coined by Time Magazine.

Howl somehow got under my skin & excited me the same way rock & roll did. If I didn't comprehend the worlds either came from, at least I knew those worlds existed. Certainly my parents would not or even could not point the way to them. & Ginsberg showed me there were other ways to make poems, other ways to be a poet. But no book of poems after Howl has had anywhere near its enduring popularity & notoriety. Nor has any poet had the same remarkable kind of celebrity.

When first published, Howl had a cover price of 75 cents. For years it was conveniently one buck. Now it's $6.95. Over time I've acquired four copies; a perfect bound & an earlier staple bound in the Pocket Poet series, a German translation someone picked up overseas, & a hardcover facsimile of the original typewritten version, which was mimeographed & circulated after Ginsberg debuted the poem at a legendary San Francisco reading.

Share |
Comments:
Never read it. Does that make me even less cultured than before?:(

I never read it either, but I first heard about this former NJ resident when researching a paper on Jack Kerouac's On the Road my senior year in high school.

Added a link to to Part 1. Now you can read it. Imagine being 12 years old & encountering a line like "who ate the lamb stew of the imagination or digested the crab at the muddy bottom of the rivers of Bowery"

& yes, Ginsberg had a sense of humor. Better in fact than most poets I've met.