The house that is "I"

One of the most disturbing recurring Jungian dream scenarios that bothered me for years turned out not to have overly complex psychological meaning after all but was directly related to a decades long adult fear of becoming homeless - a particular fear I never felt as a child. For a long time I believed it was crucially about the people in the dreams, few of whom I was able to identify. But the meaning was mostly in the configuration of the large yet weirdly familiar house in which I found myself wandering, located in a gray, depressing neighborhood, with basement apartments, beds in the attic, & a maze of stairways & halls. The house was a composite construct 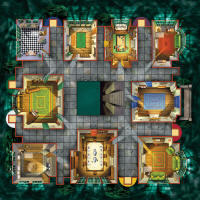 of all the places I had resided, fourteen in all, during an unsettled period between 1968 & 1977, plus a few I'd stayed at briefly. Which is why I always knew where the stairways led & was never surprised to find people & belongings everywhere.

To simplify Jung, the construct of the house itself is the dreamer, a "physical" representation of the unconscious in which the dreamer - depending on the level of lucidity - is free to roam around. I'm inclined to agree. However, my most symbolically significant dreams almost always occur in much simpler landscapes, such as the house where I grew from infancy to age 19, a flat Jersey beach, or a place in which the surroundings are subordinate to the characters; a basic stage set.

In the early Seventies in New Brunswick (& probably now), a dozen Rutgers students & "townies" would take over a seedy house, cramming themselves into any available bit of space that would fit a small mattress. Although it was a chaotic situation with almost no privacy, a nasty-looking kitchen, worn out old furniture, a scummy bathtub on claw feet, frequent turnover of occupants, constant music playing in one part of the house & someone typing in another, & always the mixed odor of pot & cheap beer, the shared rents were very low. I never lived in one of these crowded hovels, but I visited (& got high in) many. I was mugged at gunpoint twice while I resided in New Brunswick, & nearly asphyxiated by a faulty furnace. It was a terrible two years of passage out of adolescence. No wonder it formed the foundation of a repeating nightmare.

Share |
Comments:
Bob, any other thoughts on dream analysis? The majority of my dreams place me at the pool for a swim meet, where I almost miss my scheduled event. Well, I was at a swim meet on Saturday in Toms River, and whaddya know? I almost missed my event! I had to run up to the starting block, don my cap and goggles, and dive in as the starter's "beep" went off. Talk about dreams coming true. What would Jung say?

Yes, I recognize that dream because it is related to another recurring dream, one that you may also have had, the "WFMU DJ Dream." Which will be featured in blog entry soon.

A pretty fair number of my dreams seem to be situated in surroundings that are dead-on familiar but impossible to identify. Then there are my Upsala Bookstore dreams that are easy to identify but not terribly accurate otherwise. In the middle are my 'city' dreams where friends, family and I inhabit cities that are familiar montages of places I've lived. Some of these are so detailed that I can recognize (though seldom remember) store fronts across the street. Only goes to show this current West Virginian is a city boy at heart.